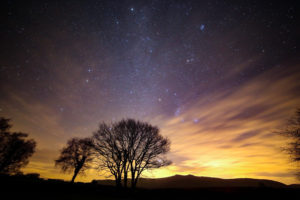 As the winter skies approach there is one constellation above all others that dominates the sky, that is Orion the great hunter. The constellation easily recognisable by its three belt stars Alnitak, Alnilam and Mintaka, contains some of the most enigmatic deep sky objects that are within easy reach of all, no matter what your astronomical expertise. Using Orion’s Belt as a guide an observer can easily make out the familiar shape of a man, his shoulders being the red star Betleguese and blue/white star Bellatrix whilst his knee and foot are represented by the blue/white stars Saiph and easily recognisable Rigel. Located below Orion’s Belt is his ‘sword’ which contains the ‘Great Nebula of Orion’ an object clearly seen by the naked eye from the dark skies of the Brecon Beacons. Take a simple pair of 10×50 binoculars and the nebula comes into sharp view.

The constellation was listed by the Greek astronomer Ptolemy in the second century AD. However, it was recorded by the Babylonians as early as 686 BCE in the astronomical tablets MUL.APIN, as the SIPA.ZI.AN.NA, “the Loyal Shepherd of Heaven.” It has even been considered that the Belt of Orion may be represented in the cave paintings of Lascaux, which were made in approximately 15,000 BCE. Orion is so ancient that the constellation is part of the Sumerian narrative of Gilgamesh. The relative position of Orion in the sky sets the figure next to Taurus, and Orion is often depicted as facing off against the bull. Dating as far back as the 18th century BCE, the Mesopotamian Epic of Gilgamesh pits URU AN-NA, meaning “the Light of Heaven,” against GUD AN-NA, “the Bull of Heaven.” The Light of Heaven represents the constellation we know today as Orion, and the Bull of Heaven represents the constellation now called Taurus.
Orion is a great figure in Greek mythology and dates back to the seventh or eighth century BCE in both the Iliad and the Odyssey. In the Iliad, Orion is noted as a constellation accompanied by his dog Sirius. Homer tells of Odysseus’ encounter with Orion in the underworld during the eleventh book of the Odyssey, where the great hunter roamed the underworld with a club of bronze.

Orion was placed in the sky upon his death, however, there are two versions in Greek mythology. In the first, while hunting on Crete, Orion boasted that he could kill any animal on Earth. Gaia took offence and cracked the earth open, from which a scorpion emerged to kill Orion. In the second version, Orion attempted to forcibly break Artemis’ vows of chastity. Threatened, Artemis summoned the scorpion that killed Orion. Because of his heroism in life in both tales, Zeus was asked to place Orion into the heavens. Zeus put Orion into the sky, but found it fitting to put the scorpion in the sky as well. To this day, it is said that Orion is still running from the beast that killed him with its deadly sting. This is reflected in Orion descending or “running away” as Scorpius is rising. Scorpius has already set in autumn as Orion rises, and as Scorpius rises in the summer Orion has already set in the western horizon. Both are ancient fables elucidating the cost of hubris.

To learn more about the constellations and how to find them why not join astronomers from Dark Sky Wales during they’re guided evenings under the dark skies of Wales. Not only will you learn about the constellations but discover how to use binoculars to gaze upon distance galaxies, nebula and planets, enjoy views through telescopes and even take a pictures of what you’ve seen. To find out more about Dark Sky Wales take a look at our website www.darkskywalestrainingservices.co.uk or visit our Facebook @darkskywales or alternatively give us a ring on 01443 523350.